I would like to take a moment to reflect on the last year and to say THANK YOU! The operations and support provided to Veterans and their Families at Tahoma National Cemetery are World Class in large part due to YOU, the Volunteers. I am extremely proud to be the Director of TNC and I brag about you every chance I get, to anyone that will listen. You are (in my opinion at least) “the best volunteers ever”.

2020 has been an extraordinarily difficult year for reasons out of our control. I think we (YOU) handled yourselves exceptionally well in the midst of a nationwide pandemic that no one could have predicted. It is extremely important to me that I take some time to thank you. I have a small request of you, Please make sure that you relay this message to all of your team members.

I think we all fully understand the challenges and the personal and difficult decisions that we (YOU) were required to make. It is remarkable that so many of you have been able to continue to push through. If you or your team has some restricted capacity, that is fully understandable. I hope that the vaccine becomes more widely available soon and that everyone is able to get the vaccine and we are protected and safe to fully resume our work.

The Tahoma staff and I are looking forward to the day when the virus is under control and we can resume normal operations at 100% capacity based on what our Veterans and Families requests. We wish you all Happy Holiday’s and look forward to a much better 2021!

The Honor Guard is a wonderful opportunity to honor veterans who have passed away.  The service we conduct is very meaningful to the families.

Also contact John if you'd like our Honor Guard to pay respects at your loved one's service. 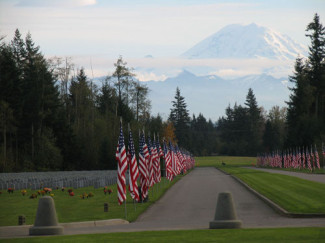 On the Second and Fourth Tuesdays (and the Fifth Tuesday if there is one in a given month), the Fred Hancock Post 19 Honor Guard participates in the respectful internment of our fellow Veterans at the Tahoma National Cemetery as a part of the Veterans Service Organization Honor Guard Association.

Tahoma National Cemetery was established Nov. 11, 1993, and opened for interments on Oct. 1, 1997. The cemetery was dedicated on Sept. 26, 1997. Phase II was completed in March 2006. The $6 million project includes over 12,000 new columbarium niches, more than 5,000 pre-placed crypts, road improvements, new signage, a third committal shelter and a third funeral cortege lane at the Public Information Center.

Tahoma has a Memorial walkway containing 28 memorials that commemorate soldiers of various 20th century wars, donated by various service organizations. At the northeast corner of the walkway is the POW-MIA flag.

A Blue Star Memorial is located north of the Public Information Center. The marker was originally part of a banner that families displayed in their homes during the 1940s to signify that they had a loved one fighting in World War II. Today, the marker honors all veterans.