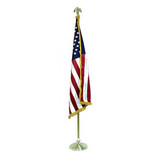 Biref Introduction To What Happens During A Meeting

This is a fairly brief explanation of what is going on at an American Legion meeting, particularly to help our newer members become more comfortable with our rituals, what is considered our uniform, etc.

MEETING FORMAT  The Commander follows the opening ceremony which includes posting the colors, the Chaplain’s opening prayer, the Pledge of Allegiance, the Preamble to The American Legion Constitution, and the posting of the POW/MIA flag.   Then the Adjutant calls the roll of officers and announces whether there is a Quorum for the meeting to conduct business and then reads the minutes and the Commander asks for corrections and declares the minutes approved “as read” or "as corrected.”

The Commander then introduces guests and visiting dignitaries and proceeds to Committee reports. Next on the agenda is balloting on proposed new members, sick call/relief/employment reports, Service Officers’ reports, unfinished business, initiation of candidates, new business/correspondence, (draping of the colors and memorial prayer if a member has died), good of the Legion (where anyone can bring up any subject except religion or partisan politics), and the closing ceremony which includes the closing prayer and the retirement of the colors, and sometimes the singing of "America, the Beautiful.

UNIFORM  Technically, if you are wearing your American Legion cap, you are in uniform.  The most commonly used full uniform includes a navy blue blazer with the American Legion emblem on the left chest, white shirt with a legion tie, and gray slacks (skirt or slacks for women Legionnaires). The Eisenhower jacket (Legion buttons) and navy pants with a gold stripe down the legs is still a full uniform (with white shirt and tie). Sometimes, when parading in hot weather, the uniform specified will be white shirt and gray or navy pants.

STAND UP/SIT DOWN The presiding officer (usually the Commander) will rap the gavel three times to signal everyone to stand and one time to sit down.

COVER/UNCOVER It is proper to remain covered (wear the Legion cap) during parading or saluting the U.S. Flag, reciting the Preamble to the Constitution of The American Legion, and during the regular meeting business. It is proper for male Legionnaires to uncover during the prayer and Pledge of Allegiance.  When uncovering, place the fingers of the right hand inside the front of the cap with the Legion emblem facing out and hold the hand and cap over the heart.

SALUTING  If wearing the legion cap, the military salute should be executed for the U. S. Flag.  If not wearing the cap, place the right hand over the heart.  Old-time Legionnaires often salute the Commander when standing to make a report or to get permission to speak, but it is not required. Once the meeting has started and the US Flag is posted, always salute the Flag when entering or leaving the meeting hall.

THE FIELD  You will hear mention of "the Field" and about "not breaking" it.  The area between where the U. S. Flag and the Legion banner are posted is dedicated to those who lost their lives in service to their country.  As such, no one should walk through or reach through the Field - walk around the colors.

POW/MIA  The POW/MIA flag or chair cover is placed on a chair in front of the Commander’s Station during the opening ceremony.

OFFICERS  We have four stations set up in a square for meetings, with one each for the Commander. Senior and Junior Vice Commanders, and Jr. Past Commander.  The Adjutant and Finance Officer are normally seated to the right of the Commander's Station, and the Chaplain to the left (as you face the Commander’s, station). The Sergeant At Arm. is usually seated close to the door, with the Senior and Junior Color Bearers, the Service Officers, and the Historian seated in the audience with the three elected Executive Committee Members and the rest of our members.

While eating the cap is removed.