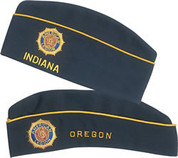 The left side (emblem side) of the cap is reserved only for the Legion emblem, city, county, district or state lettering.

If desired, the following items must be placed on the right side of the cap:
a) additional lettering, restricted to either the name of a Post, or to an officer title (such as "Past Commander"),
b) cap insignias or badges (for Past or Present officers),
c) consecutive membership insignia, membership stars, and/or authorized Legion or military services decorations.
Names or nicknames of individual members cannot be used on caps.

The Legion Uniform Cap should be worn by its members only when in attendance at official Legion meetings or ceremonies or as official guests at patriotic or other civil functions, or by individuals when officially representing The American Legion on public occasions.

The cap should be worn in a place of worship only by the Guard of Honor, Color Guard and Commander of same while in marching order or standing guard. When returned to and seated in pews, the cap should be removed.

In Legion meetings, the cap should be worn except during moments of the Pledge of Allegiance, prayer, and when standing in silent reverence in memory of departed comrades, when the cap should be held with the right hand over the heart.

Female members of the Legion should wear their caps in the manner prescribed for female personnel of the armed services.